WORK is expected to start in the spring on upgrading flood defences alongside the River Ouse in York.

The project in the North Street area, upstream of Ouse Bridge, will be the first to get underway on the ground through a £45 million investment in flood alleviation across York announced after the 2015 flooding disaster.

The Environment Agency revealed in January that it wanted to strengthen flood defences to reduce flooding risks for about 60 properties in North Street, Wellington Row, Rougier Street, George Hudson Street and areas around Leeman Road/Station Avenue and Memorial Gardens.

The work included building higher flood walls and gates along Wellington Row and North Street, raising the existing floodgate under Lendal Bridge, improving the resilience of the existing wall at the Park Inn Hotel and installing a new defence to the rear of the Memorial Gardens.

The agency was also looking at flood defences within the Royal Mail depot to reduce the risk of flooding in Leeman Road. Meanwhile, progress is also set to be made in several other locations along the Ouse in 2019. An agency spokesman said detailed designs were being drawn up for work from Clifton Bridge to Scarborough Bridge.

He said the next section along, from Scarborough Bridge to Lendal Bridge, was likely to include raising the embankment in the Museum Gardens and installing glass panels to raise the flood defence wall in front of Earlsborough Terrace and Almery Terrace.

“A significant area of this flood cell falls within the historic city centre and therefore any scheme needs to have the support of the heritage bodies. We are keen to ensure this support before shortlisting options.”

He said outline designs for work at Clifton Ings were recently shown to the public, including raising embankments and installing a pumping station on Blue Beck, better protecting 140 properties.

“Subject to planning approval, the Environment Agency hopes to start construction work in summer 2019.” The spokesman said a number of residents at risk of flooding in the New Walk area, in streets such as Grange Garth and Alma Terrace, had been sent letters asking if they would like to have property flood resilience installed.

“For residents who would like to go ahead, product selection is expected to be done in spring and installation starting in summer. A similar programme is expected for homes at risk of flooding in the South Bank area around Butcher Terrace.”

He added that further investigations would be carried out to confirm ground and structural conditions in the Clementhorpe area with the aim of submitting a planning application for new defences in spring. 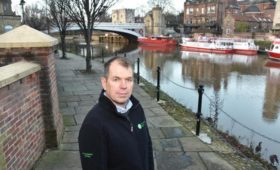