As always, lots of entertainment is planned in and around York this week from 18th – 24th March. From theatre to music, poetry to reggae, there’s something for everyone…

GEORDIE Joe McElderry leads the cast in a new Eighties musical from the producers of Hairspray’s UK tour, inviting you to embark on a trip back to a summer of love and smash-hit classics at the Club Tropicana Hotel.

3. The Remains Of The Day, York Theatre Royal, Tuesday to Saturday

STEPHEN Boxer and Niamh Cusack lead the cast in Out Of Joint and the Royal & Derngate Northampton’s adaptation of Kazuo Ishiguro’s story of memory, regret and undeclared love, re-imagined for the stage for the first time.

Novelist and playwright Barney Norris has created the stage version in collaboration with Ishiguro, depicting the memories of a proud butler, as we discover the shocking, morally compromised truth behind the manicured gardens and grand receptions of an English stately home.

DAVID Judge’s punchy and poetic exploration of family, race, identity and love recounts the experiences of a white man who becomes the adoptive father, mother and best friend of a mixed-race child, David. This lyrical and energetic monologue considers what family means in today’s society.

MICHAEL Sabbaton presents his compelling tale of mystery, sentience and loss inspired by an 18th century “thinking machine”. “The Turk’s story is one of great intrigue that influenced engineers, scientists and poets alike in the developing fields of automation and later in artificial intelligence. In the show, I present this as a haunting, philosophical adventure of purpose, being and loss”.

Their Looking Back Over My Shoulder Tour for 2019 showcases The Mechanics’ latest album, Let Me Fly, as will as such hits as The Living Years, Silent Running and All I Need Is A Miracle.

“Welcome back to York the Mark E Smith of reggae with an arsenal of feelgood tunes,” says Fibbers boss Tim Hornsby. “With an ace band launching into the songs as soon as he shouts the titles, he skips from his Upsetters classics, such as Zion’s Blood, to Marley’s Sun Is Shining and an epic remodel of Exodus retitled Sexy Dust.”

SCOTTISH siblings Pat and Greg Kane mark the 30th anniversary of their third album, Bitter Suite, with stripped-back renditions of Looking For Linda and Michael Marra’s Mother Glasgow and more besides. Expect songs from their Seduced And Abandoned debut and Remote follow-up too.

LIAM Byrne and lutenist Jonas Nordberg’s delicious sonic combination of viol and lute from 17th century France will be streamed live across Europe and recorded for broadcast by BBC Radio 3. One to soothe Theresa May’s croaky voice.

If you are looking for self-catered, serviced or luxury accommodation whilst visiting York, please check availability of our wide range of serviced apartments located within York’s city centre.

This event information has been provided courtesy of the Press. For more news click here > 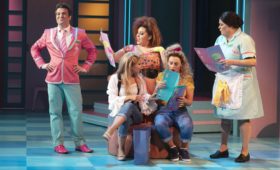