Once, buying and owning a property was deemed the ‘holy grail’ of living. Today, though, it’s fair to say it has become a less popular option. With house prices soaring and many people stuck in negative equity, it’s no wonder a rising number of young professionals are choosing the flexibility that comes with renting a home.

The reason for this is due to the cold, hard truth of the housing matter – and a fact reported by York Press recently: the average person would need a 126% pay rise to buy in York. In a recent blog, the InvestorsForum York states that the rental market is enjoying significant growth.

According to the site, “Despite landlords selling more homes than they bought, the private rented sector in England continued to grow in the 12 months after the introduction of the higher stamp duty charge.” The article went on to report that, between April 2016 and 2017, the number of households renting increased by 164,000, 3% more than 2016. This is forecast to rise further, given that the average house price has also risen by 9% since 2015 (Rightmove).

York Central’s Labour MP Rachael Maskell confirms ‘homes are now unaffordable for too many’ in the York Press article and states ‘the council’s failure to build the volume and tenure of houses that local people need further causes housing to be out of reach for too many families across the city.’

She is concerned that the council’s revised local plan, still does not address York’s housing crisis. But with more and more professionals choosing not to be ‘locked into a mortgage’, it’s got to be the ideal time for investors to put their money into rental properties.

Thanks to York’s consistent development plans, including developments such as the Castle Gateway redevelopment, Phase 3 of Hungate city centre living now launched and new homes set for the Terry’s Factory, investors are swooping in to put their money into rental accommodation, which in turn can provide an achievable and more manageable way of living.

So, while some will say getting on the housing ladder is the way forward, others will admit that they’re more than happy with renting. As a highly sought-after location to live and visit, it’s reassuring for landlords that there will never be a shortage in the number of tenants wanting to live in York.

To view some of the latest investment OPPORTUNITIES in York, click here >>

Landlords holiding on to properties to maximise gains 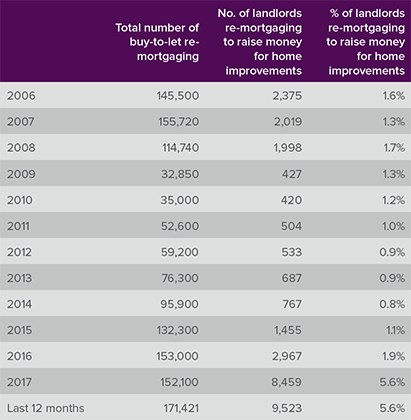 The greatest increase was in the East of England where, in the last 12 months, one in ten landlords (10.4%) who re-mortgaged released money to spend on home improvements, up 6.8% in the last two years. The same number had increased from 3.7% to 6.8% in Yorkshire and Humber, with every region across the UK showing a rise, but regions in the South have seen the biggest growth in landlords releasing cash. (Table 2) 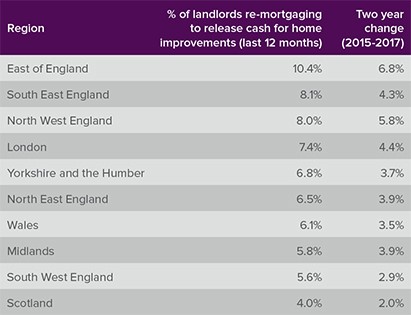 Landlords in London are seeing the most expense for buy-to-let home improvements, spending on average £35,470 over the last 12 months. This is over three times the amount an average landlord in Yorkshire & the Humber withdrew (£11,150). Across Great Britain as a whole, the average landlord re-mortgaging to make improvements took out £22,850. (Table 3) 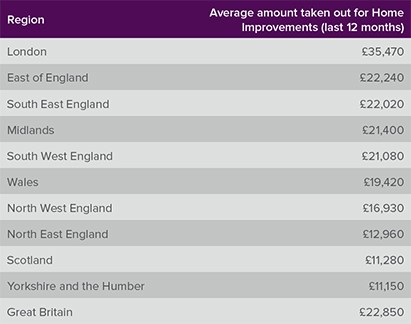 The average cost of a new let reached £951 pcm in Great Britain in March 2018, 1.7% up on the same period last year. The Midlands saw the fastest rental growth, up 2.8% year-on-year, followed by Wales (2.1%) and Greater London (2.1%). Scotland was the only region to see rents fall. This was the second month in a row, although the rate of decline slowed in March. 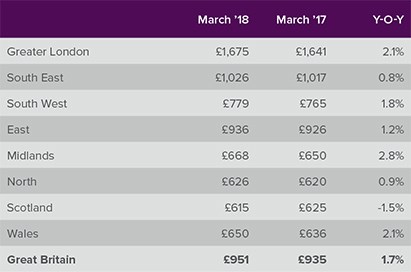 “A record number of landlords are re-mortgaging to release money to spend on their properties instead of trading up. The additional transaction costs incurred from the stamp duty changes for second-homeowners means more landlords are choosing to invest in their properties, refurbishing and improving them and holding on to them for longer to maximise gains.

“Average rents grew in seven out of eight regions across Great Britain, with Scotland being the only region to see falls. Rental growth during the first quarter of this year stands at 2.1%, 0.5% faster than the same period in 2017, as low stock levels continue to drive growth.”