The development of Ryedale house, a former office block, is underway to create 77 luxury apartments in Picadilly located in York’s historic city centre. The latest computer generated image has been created which shows a top floor kitchen overlooking the River Foss and the historic Clifford’s Tower beyond.

Other apartments will have views across the city centre towards York Minster. But the luxury flats, due to be completed by mid 2020, will will be priced from £250,000 to £1.25 million.

Ryedale House, which was built alongside the River Foss in the 1970s, has lain unoccupied for the last 15 years. Property developer Newby is converting the eight storey building into one, two and three-bedroom apartments in a £43 million scheme. The image has been released as Newby opened the doors to the public for the first time at an open day on Saturday 9th March when a show suite and floor plans were unveiled.

“All of the apartments will feature floor to ceiling glazing, to make the most of multi aspect city centre views. Some apartments will also benefit from balconies overlooking the historic city,” said a spokeswoman.

“All apartments feature open plan living areas and the fit out will be to a high specification, including Vessini bathrooms and bespoke kitchens. An impressive hotel-style lobby with concierge will greet residents and the building will also include secure underground parking, lifts to all floors, cycle stores and generous storage lockers to all apartments. Commercial units will be developed on the ground floor for cafes and small retail stores.

Nick Moody, of Newby, said “Ryedale House is an imposing building on the York skyline, and there has been much speculation about how it would be regenerated. We are delighted to now be able to unveil our collection of luxurious one, two and three-bedroom apartments in this prime city centre location.

“We have, as always, worked closely with architects, the local council and conservation experts to deliver a development worthy of its magnificent setting. The views from the full height windows are breathtaking, taking in everything from York Minster to Clifford’s Tower, making the open plan living spaces something really very special.”

“We are confident that these unique apartments will exceed all expectations, and we can’t wait to let people take a look for themselves.”

This news is courtesy of the Press. Please visit their website for more news.

For more information on the Ryedale House development please contact one of the team on 01904 652729 or info@cityletsyork.co.uk 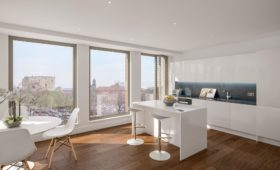