London Based Landlords are Moving North – 59% Invested Outside the Capital

As the average stamp duty bill for an investor buying in London is now £11,760 more compared to pre-stamp duty changes (Q1 2016), it is only £3,910 higher for an investor purchasing outside London. How much has this new taxation law driven these changes in investment location?

Recent figures show that almost three fifths (59%) of London-based landlords purchased their buy-to-let properties outside the capital during the last 12 months, an increase from just a quarter 9 years go (25% in 2010).

A landlord buying in London during the last 12 months faced a £24,600 stamp duty bill on average, compared to £5,330 for an investor buying outside the capital.

Rents in Great Britain increased 1.9% year-on-year in March, driven by a 3.7% rise in Greater London where rents hit a record high.

Nearly three in five (59%) London-based (i.e. living in London) landlords purchased their buy-to-let property outside the capital during the last 12 months (Chart 1).  Historically, London landlords bought their investment properties near where they lived.  In 2010 just one in four (25%) London-based landlords purchased their buy-to-let outside the capital, with 75% investing in London.

CHART 1: Proportion of London-based landlords purchasing buy-to-lets outside the capital

However, due to high house price growth and a clampdown on landlord taxation, more London-based landlords have chosen to invest further afield in search of higher yields and lower stamp duty bills.  The proportion of London-based investors purchasing buy-to-lets in their home region has fallen 17% since 2015 (before the stamp duty surcharge on second home purchases was introduced in April 2016) (Table 1). 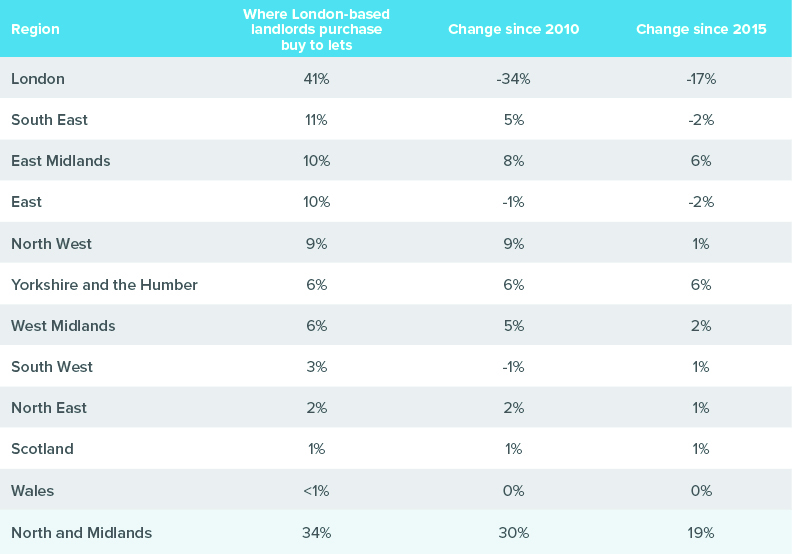 As a result, a record proportion of London investors have headed North to purchase buy-to-lets.  34% of London-based investors bought buy-to-lets in the Midlands and North during the last 12 months, up from just 14% in 2015 and 4% in 2010 (Table 1).  The East Midlands and Yorkshire & Humber saw the greatest increase following the stamp duty surcharge introduction, with 6% more London landlords buying investment properties in those regions than in 2015 (Table 1).

TABLE 2: Most popular local authority in each region where London-based landlords purchase their buy-to-lets (last 12 months)

The average cost of a new let in Great Britain rose to £969 pcm in March as rental growth continues to rise.  Rents in Great Britain increased 1.9% year-on-year, driven by a 3.7% rise in Greater London.  The average rent of a home in Greater London rose to £1,737 pcm, the highest level on record.  Meanwhile, Scotland was the only region where rents fell in March, down -0.1% year-on-year (Table 3). 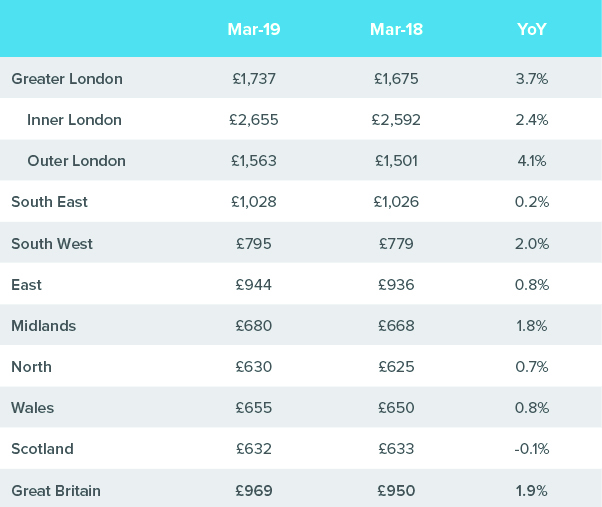 “April marks the three year anniversary of the stamp duty surcharge introduction for second homeowners.  Following the tax hike, landlords have been adapting their strategy to find new ways to make their returns.  Lower entry costs and higher yields outside of the capital are enticing investors to look further afield than they have previously.

“Following a sluggish 2018, London rents reached a record high in March.  The average cost of a new let in London rose to £1,737 pcm in March, 2.3 times more than the average rent outside the capital.  Meanwhile every region in Great Britain recorded rising rents last month other than Scotland.”

As Yorkshire prepares for this year’s Tour de Yorkshire, CityLets is excited to be welcoming visitors to stay in some of our beautiful apartments in the City of York.

The 2019 race will take place from Thursday 2nd to Sunday 5th May and will see residents display their yellow painted bikes to support the cyclists as they pass through a wide-stretching number of Yorkshire villages and towns along the way.

With spectators coming from all corners of the UK and numbers increasing year on year, the organisers hope to beat last year’s 2.8 million supporters who came out to cheer on the pro riders.

“This is always an exciting event on the CityLets York calendar, as we welcome guests to our luxury serviced apartments over the course of the race dates. Centrally located within this beautiful city and perfectly placed to follow the Tour de Yorkshire race, our serviced apartments offer a great alternative to hotel accommodation, allowing guests to share accommodation and living areas, with multiple bedrooms, self catering facilities and services such as WiFi all included,” says Sally Butterfield, at CityLets York.

As first time buyers are eager to get on the housing market yet are finding it more and more difficult to do so, our latest research reveals that affordability is improving in eight out of 10 regions within the UK.

The average time it takes for a single first-time buyer to save for a 15% deposit in England and Wales fell to 10 years and three months in Q4 2018. This was six months less than two years previous (Q4 2016) when it took 10 years and nine months to save – a sign that affordability has improved slightly (table 1). 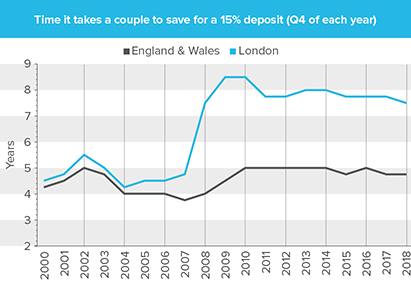 Whilst affordability has improved most over the last two years in the East, East Midlands and Wales for a single person, reducing the time required to save for a deposit by nine months – Yorkshire and Humber has seen the time reduce by 3 months. The North East and North West were the only regions where time to save stayed the same (see Chart 2 below) 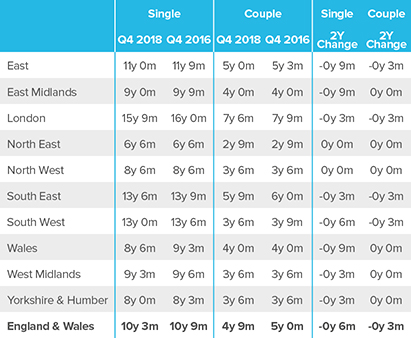 In contrast to a first time buyer in Yorkshire and Humber needing 8 years to save for their deposit before purchasing, if you were looking to buy in London you would need almost double this amount of time (15 years ad 9 months).

These improvements in affordability can be attributed to house price growth slowing as incomes continue to rise.

On average in the UK, the research showed that it was three months quicker for a full-time working couple in England and Wales to save for a home in 2018 than it was in 2016. As Chart 2 above shows, the latest data in Q4 2018 dictates that the average couple would need to save for four years and nine months to raise a 15% deposit on their first home, half the time it takes a single person. Sharing rent and every day household costs such as food and bills means that a couple can save faster.

This amount of time varies however throughout the regions – with most regions showing no improvement in the amount of time it would take to save for a 15% deposit. That said, it is still beneficial to be buying a property between 2 people rather than going it alone.

The quickest places to save for a home as a couple include North East, Yorkshire & Humber, North West, South West and West Midlands.

In contrast, over a period of 10 years, we can see that four of our regions showed no sign of improvement in the time required to save with London and South East requiring an additional 1 year and 9 months or 1 year and 6 months respectively to save for a property for a single purchaser (see Chart 3 below).

The only region where affordability had improved for couples across the UK in a 10 year period was the North East reducing the time by three months to save for a deposit, whilst the the amount of time had increased by a year or more in both the South East and East of England. 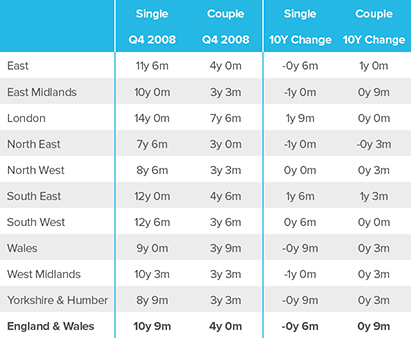 “Saving a deposit is still the biggest barrier to buying a home, but things did improve in 2018. Slowing house price growth – which is expected to continue – combined with rising wages, meant that last year it was six months quicker to save for a home than it was two years earlier. However, despite the slight improvement in affordability it still takes a single person more than a decade to save up to buy a home.

“Conditions are hardest in the capital where house prices have increased the most over the last decade. Despite price growth cooling off more recently, it still takes a single person over 15 years to save up for a 15% deposit for a home in the capital. This is over nine years longer than in the North East, which is the quickest region to save for a home.”