Home > News > The Budget: Is there light at the end of the tunnel?

The Budget: Is there light at the end of the tunnel?

Better than expected economic news suggests that austerity may be coming to an end.

On Budget Day the Chancellor, Philip Hammond, was able to draw on several better-than-expected tax receipts to announce that austerity was “finally coming to an end”. The upgraded forecasts for growth and lower government spending meant that Mr Hammond could inject funding into the NHS, as well as bring forward increases to income tax thresholds. The decision to raise the Personal Allowance a year earlier than expected will boost disposable incomes to £12,500, and the Higher Rate Threshold to £50,000, all from April 2019. Good news for tax payers!

But the Chancellor’s third budget was also underpinned with the warning that should Brexit go wrong, the pain felt across the public sector will continue. So, what is the outlook for the future of the UK economy?

The Office for Budget Responsibility (OBR) have taken a more optimistic view of the UK economies potential, but not in the short-term. They said the big picture was “a relatively stable, but unspectacular trajectory for economic growth”. It’s worth pointing out that their forecasts are based on a smooth exit from the EU.

Economic growth was revised down from 1.5% to 1.3% for 2018 due to Q1’s weak data. Yet because of the strong labour market, which is running out of spare capacity, the OBR assume that the economy will be able to sustain slightly higher growth over the next few years. Employment levels are expected to remain high, but this is due to the rise in the number of older people working. However, on a global scale, economic growth for the UK is quite weak and the forecasts show that this is unlikely to change anytime soon.

So – what does the budget mean for the property market?

October saw Philip Hammond’s last Budget before the UK leaves the EU. While housing was most definitely on the agenda, what the chancellor presented consisted of tweaks rather than ground-breaking policy measures. Here is a summary of what was announced:

Help to buy – a government backed equity loan scheme whereby buyers can borrow up to 95% of a new homes value with a government-backed loan of up to 20% (40% in London) – has been extended by two years. Now scheduled to come to an end in 2023, the chancellor also announced that Help to Buy would no longer be available to non-first time buyers.

At the same time, he announced Help to Buy regional price caps, which will come into effect from 2021. Presently, anyone buying under the scheme is subject to a price cap of £600,000 regardless of where they live in England and Wales. But from 2021 it’s all set to change. The government are setting caps at a local level, which means that buyers will be restricted to a maximum of 1.5 times the current forecasted average first-time buyer house value in each region. A maximum of £600,000 will remain in London.

Published alongside the Budget there was further reference to an additional stamp duty tax of 1% on foreign buyers. Initially mentioned by Theresa May at the Conservative Party Conference, this remains a proposed measure, subject to a consultation scheduled for the New Year. Certainly, a proposal to watch out for.

The Budget brought about more tinkering of taxation for landlords, when Philip Hammond announced changes to Lettings Relief and Capital Gains Tax. Currently landlords who let out a former home are able to claim two different types of tax relief – Private Residence Tax and Lettings Relief – which help to reduce their capital gain.

Under the terms of Private Residence Tax Relief owners currently get full tax relief on the years they lived in their home, and for the last 18 months of ownership regardless of whether or not they lived there. From April 2020, the government is reducing the tax relief on those 18 months down to nine. Changes to lettings relief mean that from April 2020 the government will only allow this tax break to homes where the owner lives with their tenant.

This legislation will hit accidental landlords – those forced to rent out their property when they’re not able to sell – particularly hard. And these make up a sizeable proportion of landlords. Our analysis shows that in London alone some 12.5% of homes available to rent had previously been up for sale last year.

In an effort to help transform our declining town centres, the chancellor announced a £675 million Future High Streets Fund. The fund will finance a task force to draw up long-term strategies aimed at turning around high streets including the redevelopment of underused retail and commercial areas into residential.

To meet the Prime Minister’s promise of ‘fixing the broken housing market’, the chancellor reiterated that the government will lift the cap on the amount local councils and housing associations can borrow to fund the building of social housing.

For more information regarding legislation and how both the budget and Brexit may affect you as a landlord or tenant, speak with one of our experts 01904 652729. 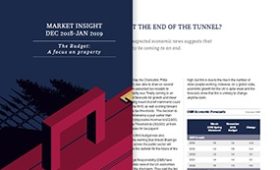