Proportion of overseas based landlords halves since 2010

TABLE 1: Proportion of homes let by an international landlord 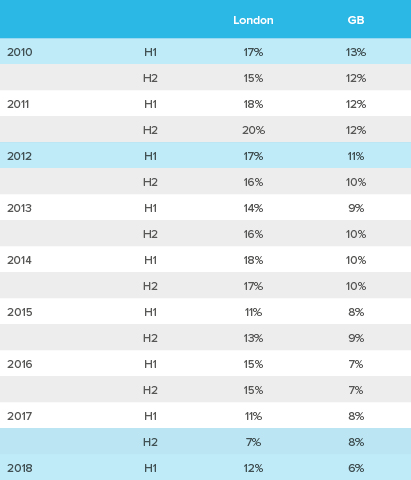 London has seen a pickup in international based landlords this year. The proportion of London homes let by an overseas landlord peaked at 20% in H2 2011, but fell back to 7% in H2 2017 – the lowest point on record. However, unlike the GB average, London saw a 5% rise in the proportion of homes let by an overseas landlord between H2 2017 and H1 2018. (table 1 above).

In H1 2018 more than one in ten (12%) homes let in the capital were owned by an overseas based landlord,  followed by 8% in Yorkshire and Humber, to display the highest proportion in the country. While at 3%, the East Midlands has the lowest. (see table 2)

TABLE 2: Proportion of homes let by an overseas based landlord by region 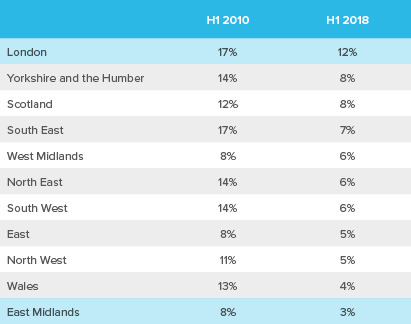 Where are overseas landlords based?

TABLE 3: Where overseas landlords are based (last 12 months) 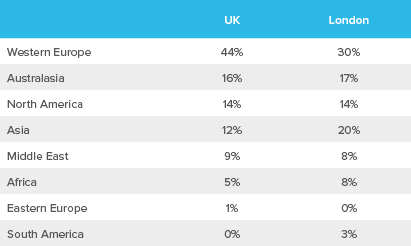 The average cost of a new let in Great Britain rose to £964 pcm in July. However, the pace of rental growth continued to slow to 0.2%. Wales saw the highest rental growth with rents up 4.9% year-onyear, followed by the Midlands (2.4%) and the South West and North both recording a 0.9% rise. Meanwhile average rents in London fell for the second consecutive month, down 1.6% year-on-year. (see table 4) 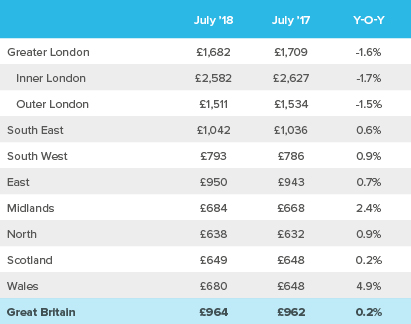 “The proportion of homes let by an overseas based investor has halved in the last eight years. Higher stamp duty and annual tax on enveloped dwellings (ATED) combined with a steady increase in foreign investors’ tax bills has led to a decline in foreign investment in buy-to-let. Overseas investors also saw the removal of capital gains tax exemptions in 2015.

“However over the last year, London has bucked the trend with a pickup in international landlords. Sterling’s depreciation, effectively offering international buyers a discount, combined with a softening London market, has helped offset the additional higher costs of owning a buy-to-let property in the capital for foreign investors.

“Rental growth slowed to 0.2% across Great Britain in July. Falls in London were offset by higher growth in the rest of the country. Inner London experienced the greatest fall, with rents decreasing for the third consecutive month.” 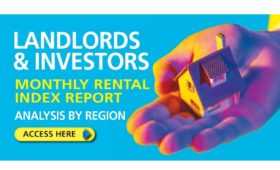