TWO major housing developments in York are a step closer to millions of pounds of government grants.

As many as 3,800 new homes could be possible under the schemes at the city centre York Central site, and at a new “garden village”.

Housing Secretary Sajid Javid announced today that both York’s bids to the Housing Infrastructure Fund – totalling £67 million – have made it through to the final stage of the competition for funds.

York council leader Ian Gillies said: “This is excellent news, and welcome recognition from the government of York’s efforts to speed up the building of good quality, appropriate housing developments in York.”

The two developments are a key part of the city’s Local Plan, he added, and government cash could help bring a mix of much-needed new homes to the city more quickly.

At York Central, a £57 million grant would help pay for the access road and complex infrastructure – adding to money already promised by the West Yorkshire Transport Fund for the 2,500 homes the site could provide.

The Clifton Gate £10 million bid would fund vital access works and improvements including an upgrade to Clifton Moor roundabout, new access roads to the site, a subway for pedestrians and cyclists, and a pedestrian bridge leading in to the 1300 home site.

Developers for both welcomed the news, saying it was a “huge vote of confidence” for their plans. A spokesman for the Clifton Gate Consortium added: “It is no coincidence that York was recently judged as the best place to live in the UK. That’s why Government funding like this is so important to supporting the city’s housing ambitions.”

York Outer MP Julian Sturdy said he had long believed that Clifton Gate – which is situated north of Clifton Moor and the A1237 and west of Wigginton Road – would need infrastructure upgrades. A masterplan for York Central went on show to the public in an exhibition at the National Railway Museum. Staff are there to answer questions every Tuesday 11am to 1pm, Thursday 2.30pm – 5.30pm, and Saturday 11am – 3pm.

For more information on investment opportunities in York, CLICK HERE >>

Or for investment advice from one of our property consultants, contact: 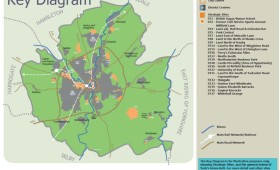