ONE of Aviva’s city centre offices is to be turned into 48 flats, as the insurance giant moves out almost 900 staff.
Yorkshire House on the corner of Rougier Street and Station Rise, one of York’s most prominent office blocks for 50 years, is to be converted. The Press revealed in June last year that Aviva was looking to sell the building as part of plans to make £225 million of annual saving by the end of 2017. A change of use application for the building has now been submitted to City of York Council, to create a seven-storey apartment block, housing 48 flats, as well as two storeys of parking.

The plans have been put forward by Yorkshire House Development One Ltd, a company set up last July by North Yorkshire businessmen Charles Jackson and Paul Brown. Jeremy Williams of IDPlanning, acting agent for Yorkshire House Development One, said the building would not be made any bigger. He said 53 parking spaces would be created and said: “It is considered that this is an acceptable amount and will not result in a detrimental impact on the local highway network.”
Aviva says it is in the process of moving around 900 staff based at Yorkshire House into the neighbouring Wellington Row offices and to a site at Monks Cross, with all employees due to be in their new locations by February.

The proposed development, which will be made up of ten two-bed and 38 three-bed apartments, is the latest in a growing list of office space in York to be converted into residential accommodation.

The Government’s introduction of permitted development rights in 2013 means office space can be converted into homes without planning permission.

Other high profile city centre redevelopments in York include:

Holgate Villa in Holgate Road, which is set to become 50 flats
Biba House in St Saviourgate, where 24 flats have been created out of the old Hilary House tax office
Hunter House in Goodramgate, which is becoming 14 apartments.
There are also plans for the creation of 82 apartments at Hudson House in Toft Green, and 59 apartments in the former Crown Prosecution Service building at United House in Piccadilly.

Aviva is seeking to make savings following the £5.6 billion acquisition of rival firm Friends Life last year. This will be its latest shuffle of staff after a four-year project to consolidate its 2,000 York employees into Yorkshire House and Wellington Row.
In 2010, after already moving staff from Clifton Moor into the city centre, the insurance firm, which has its Life division headquarters in York, announced 500 staff at Monks Cross would also be relocated within the city walls.

At the same time 300 staff from Roman House, in Rougier Street, were to be transferred into Yorkshire House and Wellington Row, with Roman House later sold to York developer Skelwith Group and earmarked for 47 apartments, before later being sold to Splendid Hospitality Group as an extension to its Grand Hotel & Spa.

Aviva initially planned to sublet its Monks Cross office, however the space remained empty. Yorkshire House opened in 1965, for the then General Accident group. In 2009 City of York Council eyed up the site as a possible location for its head quarters before settling on West Offices.

To see current property investment opportunities in the City of York please click here. For advice and information on redevelopments in York and their investment potential please contact  Alexis Hanford on 01904 652729 or email info@cityletsyork.co.uk 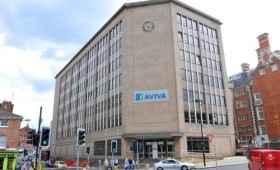